A New Brand For The Next 10 Years

When you start a business, one of the hardest things to do is decide what to call it. It’s tricky to choose a name that makes sense, is recognizable, and doesn’t infringe on existing trademarks. Plus, finding a dot-com domain name that isn’t already taken is darn near impossible.

I started my first company back in March of 2008, which means I’ve been in business for just over 11 years. When I went to file the original paperwork, it took me a while to figure out what I wanted to call my company. After a few iterations that didn’t last long, I settled on “Ron’s Websites.” My name is Ron, I build websites, and I’m a fan of simplicity. I hired a graphic designer to help me design a logo that incorporated “web” elements, and I haven’t changed it since then. It has worked well for me.

The logo I’ve used for the past decade

Since those early days, though, I’ve done a lot more than just build websites. A major portion of my time is spent on digital marketing. I’ve also done a lot of strategy and consulting for companies that want to take their business online or implement cloud computing and a mobile-first approach to run a paperless operation. So you could say I help companies “go digital.” Websites are a part of that, but there’s a lot more to it than that. For me, websites are just the first step in the wide array of digital services I can offer.

I first recognized this during the summer of 2016 and wondered if it was time for a rebrand. I stewed on it for a few months, eventually brainstorming over 100 ideas for a new company name. I thought of words that rhymed, made up catchy word combinations, and juggled letters into palindromes, but nothing made sense. After a few months, I couldn’t come up with anything. I gave up in frustration.

That December, I flew to Florida to spend Christmas with my parents. Staying up late with my Dad one evening, we were leafing through old books he collected when he lived in Germany for a time during college. I found one in particular that fascinated me. It was a collection of old German folk songs: the Deutschen Volkslieder. The book was printed in Leipzig in 1910, but contained songs from at least as early as 1837. The old blackletter type from an actual printing press was amazing to see.

“Tanz, Liebchen!” An excerpt from one of the many songs in the Deutschen Volkslieder 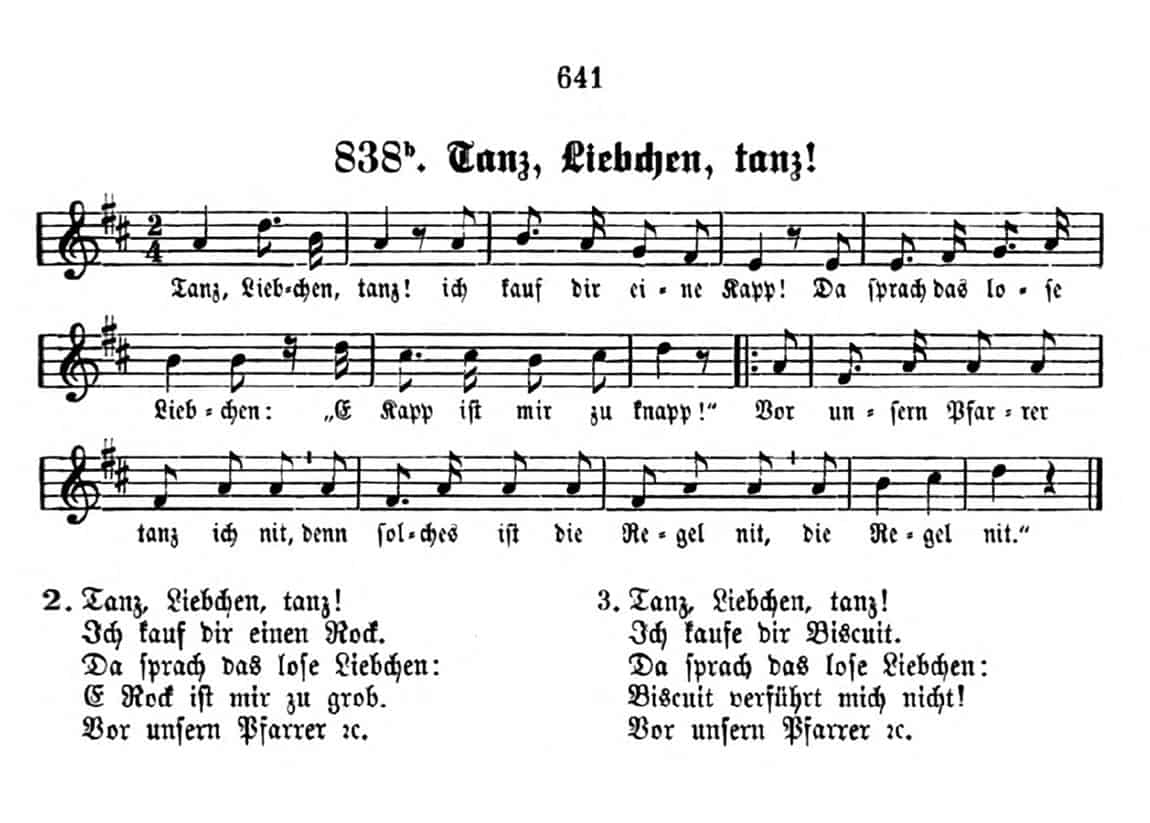 It was an interesting phenomenon: this book, printed over a century ago, was still relevant today. Long after the copyright has expired, the words on the page are still beautiful, and the poetry is still meaningful. Why? Because it’s telling a story that is still interesting. Also, because music is timeless and universal.

At this point in my life, I have little time for hobbies, but one thing I have consistently made time for is music. I’ve spent the past few years training as a classical singer, singing oratorio in choral groups, caroling during Christmas, and I’ve joined the chorus in a few operas. On top of this, there’s one particular format of music I’ve come to love: lieder.

If you’re not familiar with lieder, here’s a quick primer: the term “lieder” (pronounced “leader”) refers to a stripped-down version of art song where one person sings, in solo format, with only a piano for accompaniment. Usually, it’s sung in German, like the songbook I was looking at.

After I returned from Florida, my mind went back to work on coming up with a new brand and I pondered all of this. I thought about how being self-employed is very similar to singing a solo, like in lieder. I thought about how lieder is an art form that tells a story, and marketing also tells a story. I considered how antiquated the gothic script on the printed page was, and just how stark a juxtaposition that is to the digital world I work in. Finally, I liked the European connection: the Stauffer family came to America from Germany in the past, so it felt like embracing an old tradition and family legacy.

Putting all of these together, I came up with a new brand: Lieder Digital. For a wordmark, I decided to use a digital variation of the blackletter font, and keep it to a simple black and white, just like the printed page. (Plus, in a nod to my fellow web development geeks, you could say it has a “binary” color palette: just two options, like the digital binary code that computers use). I may change it over time, but I think it’s a good start, and I like the simplicity of it.

A new logo for (hopefully) the next decade

I doubt that anything I create in the digital world will end up in a printed compilation someone will read 100 years from now, but after celebrating 10 years of my first company, I hope this one will last at least 10 more.

Ron Stauffer is a web guy and digital marketer with a passion for helping small businesses grow. He has spent over 13 years working in the digital marketing field, building websites, creating marketing strategies, and growing traffic and revenue for small businesses across the USA. His motto is “data wins arguments,” and he uses data visualization tools and charts and graphs to track everything and prove the value of his marketing efforts for clients. Connect with Ron on LinkedIn, follow him on Twitter, or visit Lieder Digital online.